The Talleys are one of Christian music's most beloved and respected families. Their commitment to excellence and creativity in music have been their trademark since their illustrious career began, and their clear communication of the gospel is a defining characteristic of a Talley concert.

The Talleys began in 1984 and enjoyed many years of success, including a Dove Award and numerous Singing News Fan Awards. Following a three-year hiatus, the Talleys began performing together in 1996 with the current lineup of Roger, wife Debra and daughter Lauren, and today the Talleys remain a mainstay of Christian music.

The Talleys have enjoyed eleven number one songs, and have received numerous Singing News Fan Awards and Dove Award nominations. They are frequently recognized for their appearances on the Gaither Homecoming video series and concert tour, as well as In Touch with Dr. Charles Stanley and John Hagee Ministries. They have appeared on RFD-TV's "The Music City Show," and have toured overseas to Norway, Northern Ireland, Italy and South Africa. The Talleys consistently take their music with a message to hundreds of concert and church audiences of all sizes across America each year.

"It's message music. When people hear our songs, we want them to clearly understand the gospel in the lyrics, and know that God really can make a difference in their lives," says Lauren. "Whether we're in front of thousands, or in the local church on a Sunday, that message is the same."

The Talleys are a self-described "normal family," but whether they grace a concert hall, a church platform or enjoy a ball game on TV at home, they are dedicated to God and family.

Hidden Heroes
After All This Time

The Talleys - Diamond Awards
Song Of The Year - Hidden Heroes (2015) 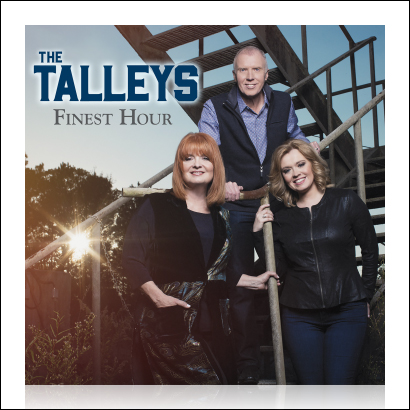